Oh boy, I can hear my rocker/R&B/jazzy-bluesy friends shrieking as they read this title, but give me a chance and then tell me to STFU. With the recent (successful) protests by Muslim fundamentalists to ban her from performing in Indonesia, I thought I’d try to understand what makes her so popular and at times, controversial to others. 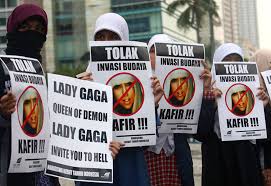 I’ve never been that big of a fan of any one artist (except Madonna, but she is in a league of her own. That’s an in-joke for Madge fans). However, there is something about this girl that is just exceptional. I’ve loved her since she first burst onto the scene with “Just Dance”, that Akon-infused (and Colby O’ Donis forgetting) track that broke records. But what makes her so darn special?

Well, methinks it has something to do with what an idiot she is. She has been regurgitating other people’s samples and looks since she started, yet no one seems to care, if sales are anything to go by.

[I will jump in here and say that the sales from her sophomore album “Born This Way” have not been as high as the first, “The Fame”, however I call this the Michael Jackson effect after the way “Bad” sold millions yet was always measured against “Thriller.” But she still had the highest grossing concert tours with the Monster Ball Tour earned $227.4 million, the highest-grossing for a debut headlining artist and other ventures are huge money spinners]

PlaGaGariser-She has been accused of “stealing” by Grace Jones who claims she has stolen her trademark looks. However, Gaga has openly said that she admires the aesthetic by Jones as well as others such as David Bowie and, surprise surprise, Madonna. 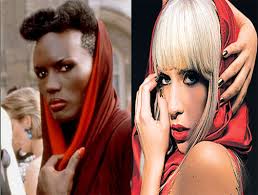 Gaga was criticised for basically using the back track from Madge’s “Express Yourself” for her hit “Born This Way.” Gaga’s song took off in such a big way, that many soon forgot these accusations. However, this did not stop Madge from giving Gaga a shout out on her recent tour when the superstar said “I thought, this is a wonderful way to redo my song (‘Express Yourself’). I mean, I recognized the chord changes. I thought it was…interesting.” – Madonna, when asked for her thoughts on Lady Gaga’s song “Born This Way” [via Newsweek]

Many might see this as an insult or a brewing feud, but I think this is the kind of thing which gets publicity for Madonna, whom I don’t think really cares if Gaga stole/borrowed from her at all. (After all, Gaga’s “Alejandro” video is like a cross between Madge’s “Like a Prayer” and “Vogue”). This is something that I think Gaga will be doing herself when some other young starlet tries to dethrone her in 25 years. (When Madonna will most likely still be on tour)

Theme Queen – In my 3rd year English class, we learned about the postmodern. I won’t bore myself and my Floor Jawers with discussing this, but I will tell you how Gaga has become the postmodern darling as she has encapsulated this notion.

For every bit of criticism she receives, I feel that Gaga thanks her lucky stars and tries to top herself each time. The way she dresses is intentional as this is meant to intrigue and entice. Like I’ve said, she draws on the past for inspiration; however she does so in a conscious and deliberate way without acknowledging the sources. This is what takes her antics from tribute to the postmodern.

She is also extremely conscious of the way in which she presents her albums and ideas. “The Fame”, the name of the first album, as well as the game (hehe) is an idea which she has milked and used to her advantage. It is an idea which formed a thread on most of the songs on the album and bled into the music videos and performances.

The fame will kill us all. It is a monster which must be killed. The truth must be denied. These are all ideas which have come out of the music which give it a multi-layered approach, I say as my friends roll their eyes at me.

Fame “Slore”– That’s a cross between a slut and a whore, by the way. Last time I checked, she is currently the first person to be approaching the 25 million mark on Twitter with the most followers. This is the kind of careful marketing that has made her so phenomenal.

She has latched on to a certain sector of the public and really nurtured this rapport with her fans. These fans are called “monsters.” In this way she has cashed in on the idea of the “other”, the monsters of society. The gays and lesbians, the freaks, the fat kids, nerds and others who are bullied have flocked to her as she has maintained this idea of different being better.

Also cashing in on something popular, yet doing it in her own way is the Illuminati. Ooooooh I can hear you all cowering in fear. These string pulling devil worshippers are watching us and we should be speaking of this in hushed tones. This has been discussed at length, so for more conspiracy theories, check out http://vigilantcitizen.com/musicbusiness/lady-gaga-the-illuminati-puppet/  where all this tomfoolery will be further analysed at length in a professional way that I can’t begin to do.

However, this is exactly what she is. No, not the illuminati! Rather a careful idea, a brand, a ploy to get attention and more fame and feed into the monster that is all of us. And she knows it. So instead of alluding to it like these other scared girls in the industry, she sells it.

I mean, we are all talking about her, whether we like it or not. My father even mentioned the egg stunt at the Grammy awards in 2011. My 59 year old father!!