The Oil and Glitter of Politrix.

Warning: this could get really convoluted, but there’s logic in here somewhere.

So earlier today, my husband fired General Bheki Cele and replaced him with new police commissioner Mangwashi Phiyega. It was suitably dramatic and I know when he gets home later there will fireworks in the bedroom. But it got me thinking…

Recently I attended the Franschhoek Literary Festival. I didn’t have anything to report back at the time because, while it was amazing for a young writer, I didn’t feel there was anything worthwhile for anyone other than myself.  Then I thought back.

So I got the amazing opportunity to attend the talk on the second day of the weekend and it was called “From Page to Stage” hosted by director Janice Honeyman. It was a talk with Pieter Dirk-Uys, Craig Higginson and Mike Van Graan, three acclaimed South African writer-directors.

What got me thinking about this was, like it always does, the state of our nation. For those of you who don’t know (and shame on you for that) Dirk-Uys is the country’s most famous drag queen, although many would dispute this. This is so simply because Tannie Evita Bezuidenhout has such a personality of her own that even the most butchest of Afrikaner men would call her “Tannie” (for those of you who don’t know, this is a term of endearment for older women, translated means “Auntie”)

He dresses up (sometimes even on stage like when I saw him in Oudshoorn for his show “The End is Naai”) and transforms into a whole new person. Now this is nothing new for drag performers; however Pieter is one of the best satirists we have. And the way he transforms himself into herself made me realise that, whether he intended to or not, he is taking a dig at politicians who dress up themselves, for the benefit of the show.   I do not only mean outward dress, but way of speaking, mannerisms and all the pomp and glam that go with leading the people.

Whenever I see a politician on TV, I wonder how they are at home. As the sixth Zuma wife, I can tell you that Jakie is as charming and eloquent in bed, I mean home as he is in the public eye. Of course he makes us all call him Mr President and “better than Thabo” but that’s standard procedure, right? Just doing our bits for the bits of our nation.

And these guys sure do put on an act. One minute partying with their comrades, the next dancing with the locals, always dressed appropriately for the part, of course.  So why do any of us, not just the stupid general public, bother giving these chameleons the time of day?  Because we like a show, that’s why. We love watching someone try to woo us, we love the lights, the romance, the action, the melodrama, the glitter, the balls, the testosterone, the duels, the speeches, oh god do we love the speeches. Haven’t we all been wooed by someone before with sweet talk and tears, strong words that make us weak at the knees and obvious lies that impress us with their passion?

In a way, their lives are from the page, to our stage.

I’m sure most people have seen the “wrestling” of the WWE. There is a reason why this particular “sport” has not been admitted in the Olympics. No, not because of the steroid consumption and overacting, but the oil budget would be through the roof. These guys are no different from politicians; they put on a show, they jump around, flex their muscles, talk some trash. 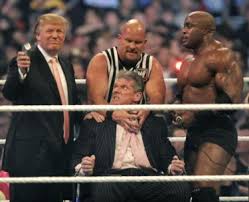 Malema would not be where he was today if not for that fiery irreverence that kept us all glued to his moist lips. If he were level headed and rational while saying the foolish things he said, do you think we would give two shits? NO. Hitler would not be what he was without the frothing and the arm flex. The same way go-go dancers would not be what they were without the flexing legs and frothing… personalities. Let us all now see this world for what it really is- one big production. And a 5 6 7 8!